a year ago today | my hysteroscopy

As many of you know, Matt and I had a bit of a hard time getting pregnant. Let me tell you how it all happened. When we first started trying, I thought I would for sure be pregnant within the first 3 months. To my surprise, it took us 15 months. If you are under the age of 35, doctors usually like to wait a year to allow you to get pregnant without any interventions, which can be really hard because personally, I just wanted to know right away if something was wrong. After the first year of trying, we started getting tested. We were both young and healthy and we technically should have gotten pregnant within that time. My OB tested me for estrogen, progesterone and other things. The thing about these tests is you have a very small window to get an accurate result, so I started to do a different test every month. On the third month of being tested, I got a HSG done. Basically, they put a die inside your uterus while getting xrays done to see if there is anything inside the uterus. This is when they discovered I had polyps in my uterus. I was informed I would need a hysteroscopy to take a closer look and they would remove the polyps once inside. I remember asking my OB if I could get pregnant without the surgery and her response was: “I’m not God so I don’t know for sure, but I would it is very unlike you’ll get pregnant with the polyps.” At the time, this felt like a huge stab in my heart. I somehow felt like my body had failed me and the thought of needing a surgery to get pregnant, something that is supposed to be so natural, just hurt. After a week of lots of tears, we decided to proceed with the hysteroscopy and I made the appointment for June 29th in the morning. Again, we had a very small window to have the surgery done since it needed to be done after my period was done but before I would be ovulating. My parents and little brother were flying in from Florida to stay with us for a week and they had no idea we were trying or that I would be heading into surgery as they would be landing in LAX. It was a bit stressful to say the least. Matt dropped me off at the hospital as he headed to the airport. As I waited to be taken to the OR, I had one of the nurses snap a photo for me and sent it to a friend. I had so much anxiety over the procedure and for what was to come if it didn’t work. She responded in excitement – “this is all part of baby Glidden’s story!” She was so right. Little did I know I would be getting pregnant on my next cycle. The surgery went without a hitch, except for the fact that they found I have a heart condition that makes my heart have palpitations, but that’s neither here nor there. I prayed for no nausea or pain, since we were going to be spending the week exploring California with my family, and thank the Lord I had neither. This is all part of Eli’s story and though it was pretty dark walking through that, I am so thankful to look back and be reminded of God’s grace and provision through it all. Little did I know a year ago that a year later I would be snuggling with my 3 month! 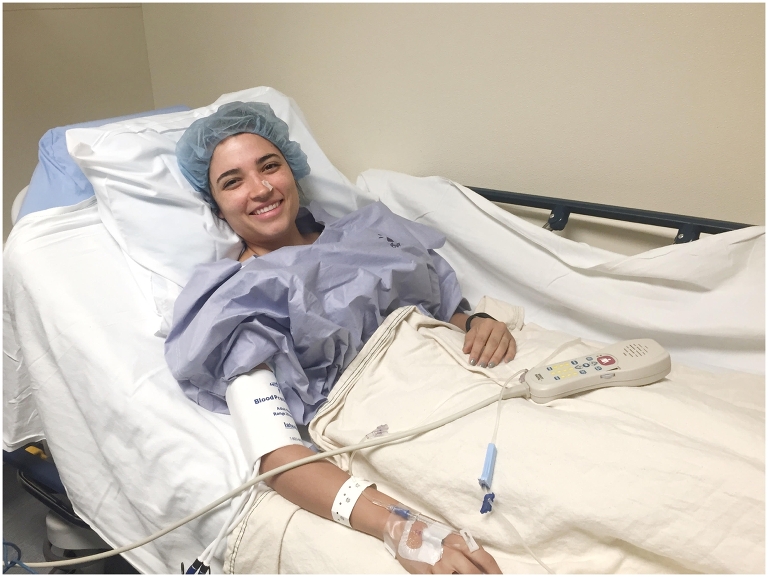